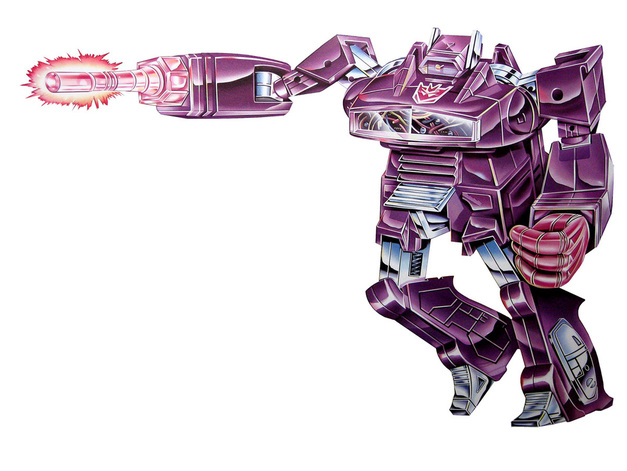 ​Profile: Cold, brutal, scientific approach to war. Seeks to overthrow Megatron as leader of Decepticons because he believes logic says he would be better. As laser gun, can emit lethal beams of energy from anywhere on the electromagnetic spectrum: gamma rays, x-rays, light, infrared rays, radio waves, etc. Flies in laser gun or robot mode. High fuel use, but can be powered by nuclear sources. Often confounded by initiative, emotional thinking.

Weapons of Choice:
Scrapbook notes (Personality and development): Leader of the Decepticons. He was the one who planned Megatron's demise in order to lead the Decepticons. When Megatron went off to what would be his final confrontation with Optimus Prime, Shockwave planted a moleculon bomb in Megatron's back, which destroyed both opponents during their battle. Although the whole Decepticon army is a very disfunctional group of comedy reliefs, Shockwave is the deadliest and most serious of them all. He makes the Decepticons more of a threat than just a comedically disfunctional army, which means that even though the 'cons are pretty much fun characters, they can also be pretty effective and deadly fighters who can leave Autobots incapacitated. So he's the driving strategic mind behind the army. In Season 2, Shockwave will be sucked into a black hole along with Tankor, Rodimus and Nightbeat. The black hole was an illusion created by the evil Quintessons, who immobilized Shockwave, Tankor and Nightbeat into submission and took Rodimus into a torture chamber. Shockwave's body was dismantled and used for experimentation. During a raid on Quintessa in which both the Autobots and Decepticons participated, Shockwave's remains (along with those of Tankor) were recovered. Knock Out reconstructed Tankor first under Starscream's orders, but he also secretly reconstructed Shockwave, because Screamer wasn't paying him at all for his services. Shockwave returned and once again resumed leadership of the Decepticons after giving poor Screamer the beating of his life.

​Rodimus Prime: Shockwave is a really hard opponent to beat. If it weren't for him, the Decepticons would have been history a long time ago. But Shockwave has a lot of military experience and he's the only one who can make the 'cons an effective and deadly fighting force. But then again, fighting is no fun without a challenge, and every time we face Shockwave, there's always new challenges, so at least I can give him that.

Starscream: Shockwave is a dolt. He's just not boss material like I am!!!! He's too devoted to logic, he's a total butt and he always beats the scrap outta me ever since he was rebuilt by that ungrateful piece of scrap Knock Out!!!! I was almost on the verge of total triumph over the Autobots until ol' one-eye came in and screwed up everything!!!!