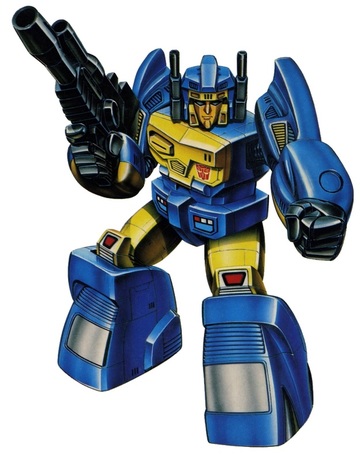 Profile: Tough, no-nonsense type. Sometimes breaks rules in order to get what he wants. Works best when he works alone. As comfortable driving down a dark alley as he is on a well-lit, six-lane superhighway. Carries two photon pistols and a plasma blaster with an infra-red sight. Also equipped with visual and audio sensors. Usually gets by with just cool-headed logic.

Weapons of Choice:
Scrapbook notes (Personality and development): Rodimus' second in command and the Autobots' resident detective. Tough, no nonsense, he prefers to work alone, but he is still a very effective teamplayer as well as friendly and charming towards his allies. There is a secret that always seemed to hide really well from him... Minerva's attraction towards him. When Minerva tells him about it, Nightbeat is pretty receptive towards her, and tells her that he also had feelings toward her. In Season 2, Nightbeat (along with Rodimus, Shockwave and Tankor) will be sucked into a black hole which is actually an illusion created by the deceitful Quintessons. Nightbeat gets dismantled, and his parts used for experimentation. His parts will eventually be salvaged, but due to excessive damage, he won't recover fully until the end of Season 3.

Rodimus Prime: Boy, where do I start. Nightbeat is the kind of guy who won't allow any nonsense from anybody. I've had the honor to work with him several times, and because of that, we share a mutual trust and loyalty toward each other. He's just an excellent second-in-command.
​
Minerva: Golly, Nightbeat is so dreamy!!!!! He may not talk much, but gee whiz, he's so handsome!!! I love being with him. He's the kind of guy that this nurse needs. Sure, he may be much older than I am, but I don't care. He's my man, and I won't change him for anything in the universe!!!!