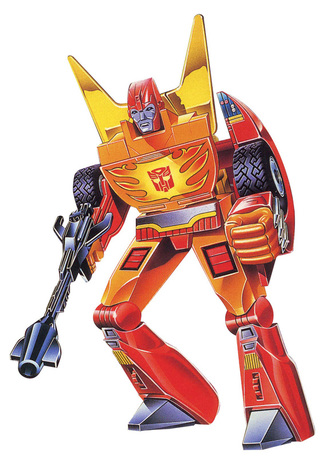 Profile: A vanguard for the Autobot ranks. Possesses acute military prowess. Speaks with the savvy of a seasoned veteran. Expert tactician with exceptional maneuverability in battle. Can be hot-headed at times. Has a tendency to act first and ask questions later. In robot mode, carries a photon eliminator that shoots high voltage electricity. Range: 500 miles. Speed: 200 mph. Sole purpose is to protect all life. His only weakness is his compassion for other living creatures.

Weapons of Choice:
Scrapbook notes (Personality and development): Autobot Leader. Powerful, confident, wise but also very warm and friendly. Originally he was Hot Rod, but after Optimus Prime and Megatron were destroyed in an epic conflict, Hot Rod and the Autobots were forced to search for the Creation Matrix, which Optimus safely hid on Earth (the whole Search for the Matrix thing is going to be a five part pilot miniseries). Although the Decepticons tried to prevent him from reaching the Matrix, Hot Rod and his team managed to fight their way through their enemies and they finally found the Matrix, which changed Hot Rod into Rodimus. In Season 2, Rodimus will be sucked into a holographic black hole, and captured by the merciless Quintessons along with Nightbeat, Shockwave and Tankor. Rodimus will be tortured by the Quintessons while watching his second in command and his enemies being dismantled for experimentation. He and Nightbeat will be rescued eventually, but he'll be in the repair room during the first half of Season 3 recovering from the damage inflicted by the Quintessons' torture machines and the traumatic pain of watching his second in command being torn to pieces for experimentation.

​Nightbeat: There's no one in the universe that can compare to Roddy. We've fought together ever since I met him. I've seen him grow up and become the greatest Autobot Leader to ever live. He cares about us and he never lets us down. A true role model for all of us.

Arcee: Ever since I first met him, I always felt he would do great things for our cause. He always makes us all proud. Sometimes he questions himself and he feels inferior to previous leaders, but that makes him an even better leader than anyone who came before him. This is why I love him so much.