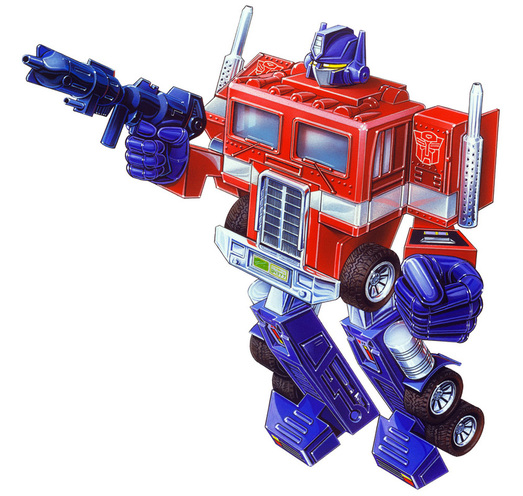 Faction: Autobot
Function: Commander
Motto: Freedom is the right of all sentient beings.

Profile: Optimus Prime is the largest, strongest and wisest of all Autobots. Feels his role is the protection of all life, including Earth-life. Fights unceasingly to defeat the Decepticons. Splits into three autonomous modules: 1) Optimus Prime... the brain center known as the Commander 2) Roller, the Autobot scout car... a spy who operates up to 1200 miles away; and 3) Autobot Headquarters... the combat deck equipped with a versatile mechanic/artillery robot. Injury to one module is felt by the other two.

Weapons of Choice:
Scrapbook notes (Personality and development): The father figure of the Autobots. Confident, wise, warm and kind. He is one of the first casualties in this story. He is heavily damaged during a confrontation with Megatron, when the Moleculon Bomb which Shockwave placed in Megatron's back explodes. Optimus' body is rescued, but he dies from his wounds shortly afterwards.