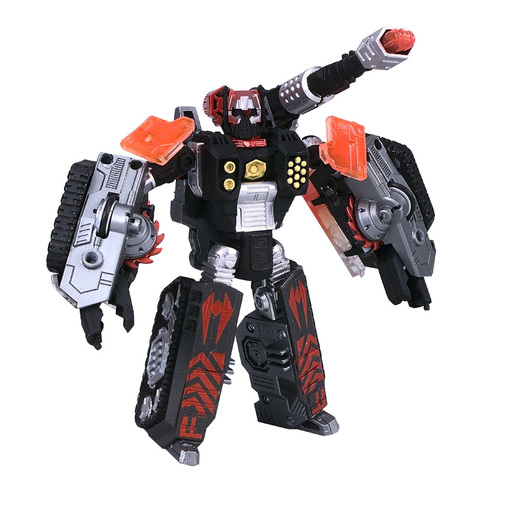 Profile: A giant power-tank Vehicon. Tankor exists only to crush everything under his treads that he doesn't blow up first. Simple-minded, Tankor is unquestionably loyal to Shockwave. He wields a flamethrower in tank mode, while head mounted energy lasers top off an assortment of heavy weaponry in robot mode. One of Shockwave's most trusted soldiers despite his limited intelligence, Tankor is in charge of the powerful Vehicon drone armies.

Weapons of Choice:
Scrapbook notes (Personality and development): The brute of the Decepticons. Tankor has only one emotion: ANGER!!! However, he can be easily duped by both allies and enemies alike. Even with those minor flaws, he's still Shockwave's most effective and obedient soldier. In Season 2, he'll be sucked into a black hole along with Shockwave and dismantled for experimentation by the Quintessons. His parts will be retrieved alongside Shockwave's, and Starscream orders Knock Out to repair Tankor immediately in order to increase the power of the Decepticons. Tankor is successfully repaired and revived, but will clash with Starscream immediately: "WHY IS PUNY JETBOT IN BOSSBOT'S CHAIR???!!!!". However, this conflict will be short, because Shockwave immediately comes into the scene to deal with Screamer. He's powered by the spark of Wheeljack's mentor Rhinox.

Wheeljack: Boy, out of all the tragedies I've suffered, this one is the worst of them all. I could have saved him, and yet, I just lied there, helplessly looking at the Vehicons taking him to Megatron. He was like a father to me. He always treated me kindly, and he taught me all of his secrets. (Sigh) Don't worry Rhinox, I'll bring you back to your former self someday, I promise.

Sky-Byte: This bulky piece of scrap used to be an Autobot????!!!! Unbelievable!!!! He's just too angry and violent to be one of those Autoscraps!!!! Then again, despite his stupidity, he is a pretty effective brute, but sometimes he can get carried away.