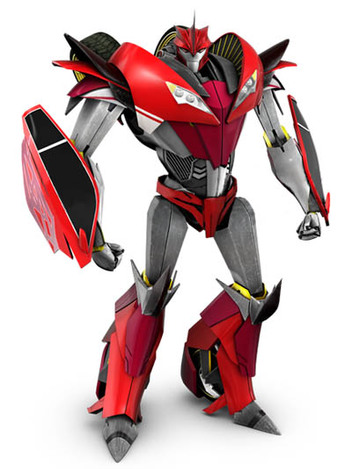 Profile: Knock Out is oily slick; the ultimate salesman. Everyone knows his weapons are dangerous and prone to malfunction, and his installation methods often leave Decepticons scarred and crippled. But who can resist having quantum disintegration at his fingertips?

Weapons of Choice:
Scrapbook notes (Personality and development): The resident smooth talking medic of the group. He was originally a teacher, but the war forced him to join as a field medic. He decided to join the Decepticons because they paid more and he needed to pay his ever-rising debt bills. A running gag would be that whenever Knock Out has a new accessory (repair tools, wheels, etc.), troopers would ask him when did he buy it, and he would say something to the effect of "next month if my payday allows it". He's also Starscream's worst nightmare. Whenever Starscream's being repaired by Knock Out, anything bad can happen to him (from getting crushed by the badly constructed roof of the repair center to his repair bed rolling out of the base into a waterfall that is on the side of the base). Even when he's not being repaired, Knock Out is a very big bad luck bringer to poor ol' Screamer (he accidentally threw Screamer into an Energon oven once). In Season 2, when Shockwave and Tankor are sucked into a black hole and Starscream takes over, Knock Out starts becoming upset and desperate about the fact that he isn't being paid for his services. When the Decepticons join the Autobots in a raid to rescue their allies, Knock Out finds Shockwave and Tankor and takes them into his repair room. Starscream orders Knock Out to revive Tankor, but because of the fact that he needs money to pay his ever-increasing debt bills, he secretly works on Shockwave's resurrection. He succeeds, and he gets back his payroll along with a raise.

Minerva: This guy, I dunno what he's supposed to be. He is a 'con, but he acts like a neutral. However, I get the feeling that he doesn't like me too much, especially after what I did to his paint job. However, he just doesn't seem to fit with the other 'cons at all. And his somewhat prissy attitude kinda makes him stick out a whole lot more. Just... weird. He also seems to be attracted to Strongarm, somehow. Why??? I dunno. Strongarm is my friend, but she always felt like she didn't fit with the rest of us, so I get the feeling that she's found a pretty odd kindred spirit, 'cause Knock Out is definitely a misfit.

Strongarm: Boy, I never thought this day would come. The day in which I would be attracted to a no-good 'con. Especially one as prissy and vain as Knock Out. But, I dunno why, but with every passing day, I love him even more. I can't stop thinking about him. If only I could be brave enough to admit it, but I can't compromise my team and my job just for my feelings. But I know that someday, I'll be able to have enough guts to tell him about my feelings with three simple words: I love you!!!!