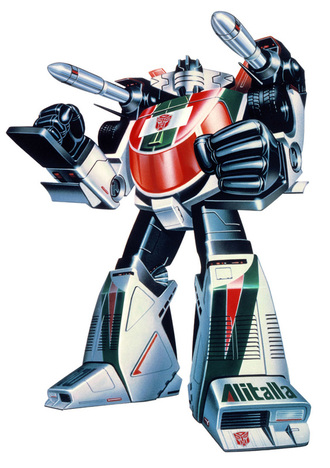 Faction: Autobot
Function: Mechanical Engineer
Motto: Never do what your enemy expects you to do.

​Profile: Wheeljack is the mad scientist of the Autobots. Always inventing new weapons and gadgets. Most adept at driving while in car mode. Likes to show off his stunts. Flying range of 800 miles using solid-fuel rockets in arms. Shoots magnetic inducer, shrapnel-needle and gyro-inhibitor shells from his shoulder cannons. He is his own worst enemy. Often injured while experimenting with new weapons.

Weapons of Choice:
Scrapbook notes: The wonderful mad scientist of the Autobots. His lab explosions when he's experimenting will be mostly played for comedic effect and he'll be mainly used as the Tech Advisor for the Autobots, but he'll also be the equivalent of Chuck Norris in battle, almost invulnerable, unpredictable and undefeatable. In one episode, he'll have to defend his base alone and in an injured state (after one of his failed experiments). This episode will be a "don't underestimate this guy because of his handicap"-type of episode.

Drift: Wheeljack may be a very friendly and easy-going Autobot, but he's also a very dangerous threat to his opponents. His fighting skills are really impressive for a Mechanical Engineer. Even when injured, the Decepticons are in for a very nasty surprise.