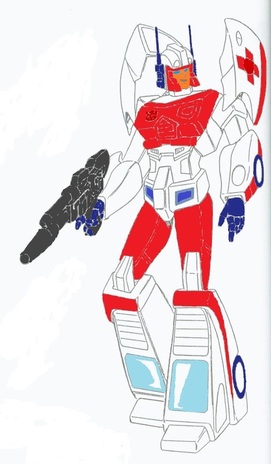 ​Profile: Tough, beautiful and intelligent, Minerva is a great asset to the Autobot cause. After training on Cybertron under the tutelage of Protectobot First Aid, Minerva was assigned to continue her field training on Earth. Heading for the Autobot base, Minerva crash landed off course in Quebec. While there, she met a young human girl named Marie, and they instantly became friends. She has since become equally comfortable hanging out with human girls as her fellow Autobots.

Weapons of Choice:
Scrapbook notes (Personality and development): The Autobots' resident medic gal. Along with Bumblebee, she's one of the youngest members of the Autobots. She patches up 'bots with the same careful precision with which she aims a blaster. She's very friendly and easy going, but also very shy and absent-minded. She also has a very strong attraction towards Nightbeat, the Autobot detective. She finds him very attractive and intriguing, but her shyness makes it hard for her to talk about her feelings toward him. She goes to her closest friend Arcee for advice, and she recieves some pretty useful tips to score with the tough as nails detective. She later reveals her feelings toward him during a mission and that starts a very strong bond between the two. In Season 2, when Rodimus and Nightbeat are sucked into a black hole, Minerva starts developing a deep sadness due to the loss of Nightbeat. Once again, Arcee is the one who comforts her during these tough times. They will get a lot tougher at the end of the Season, when she discovers Nightbeat's mangled body and dismantled parts in a Quintesson lab during a raid on Quintessa. For most of Season 3, Minerva starts to have confidence problems (think Ratchet during Marvel's Return of Megatron/Classic Pretenders saga) due to her inability of repairing the Autobot that she has loved for a long time. She starts having nightmares about Nightbeat dying while patching him up, and it's up to Arcee once again to try and cheer her up in these even tougher times, and tell her to persevere in order to recover her loved one. She would return to be the cheerful girl of old at the end of Season 3, when she finally wins over her insecurities and manages to repair and revive Nightbeat completely. A gal with a lot of emotions that has managed to win all of her inner battles.

​Nightbeat: Boy, oh boy. This princess just doesn't belong in a battlefield. I mean, sure, she's sweet, charming, friendly, talented and overflowing with idealism and care for her fellow Autobots. However, despite her young age, she has seen a whole lot. She's seen the consequences of war first-hand, and that makes her feel very insecure in combat. However, her bravery really makes up for her insecurity. I mean, she's quite possibly the bravest Autobot in the team, and I've seen her take on the most dangerous opponents you can imagine. This is the reason why she's my girl.

Arcee: Minerva is a really sweet girl. She's just a really nice, friendly girl but she's also a really intelligent and well-educated scholar. I've seen her reading Shakespeare plays for hours as well as some other books. She's an exceptional girl with a very bright future ahead of her.