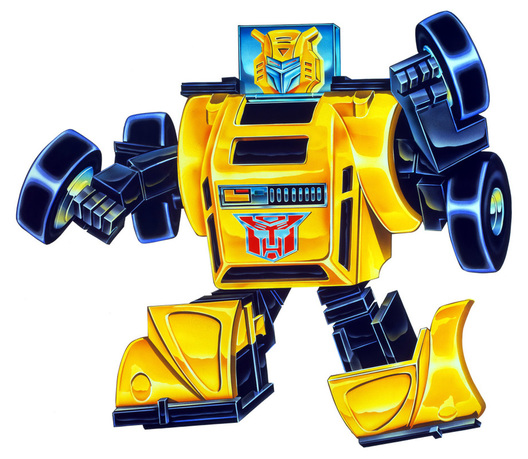 Faction: Autobot
Function: Espionage
Motto: The least likely can be the most dangerous.

​Profile: Small, eager and brave, Bumblebee acts as a messenger and spy. Due to his small size, he dares to go where others can't and won't. He idolizes the bigger Autobots and strives to be accepted. He is the most energy efficient and has the best vision of all the Autobots. He can go underwater for reconnaissance and salvage missions. Although physically the weakest Autobot, his stealth more than compensates for this inadequacy.

Weapons of Choice:
Scrapbook notes (Personality and development): The little cuddly, friendly, huggable, adorable yellah guy. Bumblebee is a great asset to the Autobot cause because his small stature allows him to go and hide in places where his friends cannot go. However, despite his good natured, friendly attitude, 'Bee hides a very profound sadness inside of him which sometimes makes him doubt his own abilities. On Cybertron, Megatron killed Bumblebee's best friend Bumper, which shrouded Bumblebee with guilt (it could be explored more in an episode in which Bumblebee has to conquer his traumatic past and his fear for the Battlechargers, who were the ones who captured Bumper). Despite this, Bumblebee manages to hide this sadness with good natured humor and optimism.

Wheeljack: 'Bee's our kid. He's just the little adorable guy we all know and love, but he also is very brave and daring. In fact, I've seen him take on those big Tank Drones like a boss!!! He's also great for scouting missions, 'cause he can go wherever we big 'bots can't. 'Bee's our boy.

Smokescreen: I've known Bumblebee ever since he joined the 'bots as a little kid. He suffered a lot in life, but it's really surprising how he can keep his sense of humor despite going through the most traumatic of experiences. I've learned a lot from him over the years.