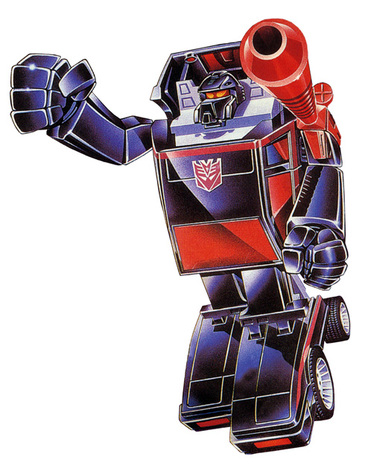 Profile: Likes to watch things blow up - the bigger the explosion the better. Uses parked cars and gas station fuel pumps for target practice. Usually stays busy as a Battlecharger, but terrified of boredom. Maximum speed: 185 mph. Range: 550 miles. Has high-energy particle beam rifle. Easily distracted by a beautiful car - because he wants to destroy it, not admire it.

Weapons of Choice:
Scrapbook notes (Personality and development): The black Battlecharger. He's the calmer, more articulate member of the duo, but that still isn't much, because he's still very dumb and loves havoc and destruction. Like Runamuck, he'll be mainly used for comedy relief, but he'll get some moments in which he'll get to show his skills at disabling and giving collateral damage levels to Autobots. Runabout and Runamuck were also responsible for capturing Bumblebee's friend Bumper, and taking him to his brutal fate at the hands of Megatron.

Bumblebee: This guy and his partner are just road demons. However, despite the atrocities and the bad things they've done, I still think they can redeem themselves. They excel in speed, strength and firepower, but they lack a lot of brains and patience. However, that doesn't mean they aren't dangerous. Runabout in particular seems to be the guy who gives the order, while Runamuck is his "yes-man".

Runamuck: MAH pal Runamuck is the most boss guy AH'VE ever been paired with. Don't mess wit' us, 'cause if ya do, we'll mess with yo life!!!