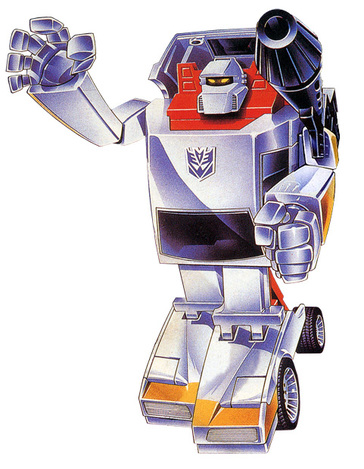 ​Faction: Decepticon
Function: Shock Trooper
Motto: The road is my playpen; cars are my toys!

Weapons of Choice:
Scrapbook notes (Personality and development): The white Battlecharger. Like his partner Runabout, he loves to make a good wreck and he also loves explosions. These two are just made for wrecks and comedy, but they'll get some moments in which they'll get to show their skills at disabling and giving collateral damage levels to Autobots. Runabout and Runamuck were also responsible for capturing Bumblebee's friend Bumper, and taking him to his brutal fate at the hands of Megatron.

Runabout: Runamuck's MAH homie!!!! He always agrees with MAH plans and SOMETAHMS he comes up with somethin' better!!! We're made for strategy, bros!!!!