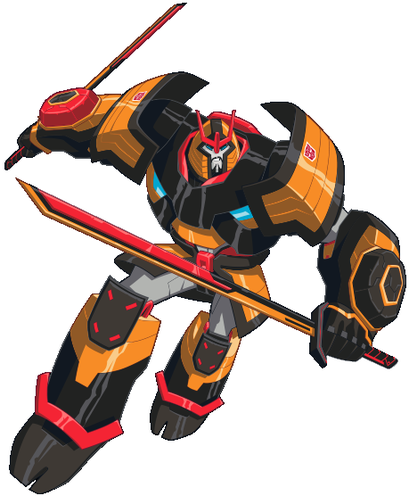 Profile: Drift used to fight for Megatron, and was known as one of the most terrible warriors ever to stalk the face of Cybertron. Something happened that changed him, bringing home all the horror he'd inflicted. Since then, he has hunted the Decepticons from one end of the galaxy to the other, bringing his own brand of justice to the evil robots.

Weapons of Choice:
Scrapbook notes (Personality and development): A martial arts expert bounty hunter. He was originally a Decepticon named Deadlock, but then discovered about their dishonorable ways and decided to atone for his previous wrongdoings by joining the Autobot cause. He hates to use guns, but he'll use them only if he has no choice. He also teaches his fellow Autobots about martial arts, and these teachings really come in handy when dealing with Shockwave's forces. He considers Sky-Byte as the only worthy Decepticon to fight against. Although ol' Sky-Byte is pretty impatient and clumsy, he's the only member of the Decepticons that has a conception of honor and respect for his opponent (despite his bombastic ramblings and taunts), which is why Drift regards him as the only foe worthy of his attention.

Sky-Byte: Drift is a worthy opponent for me to scrap!!! He has a great sense of honor and he also has my respect. He's not a minor annoyance, he's an experienced and dangerous enemy to the Decepticon cause.