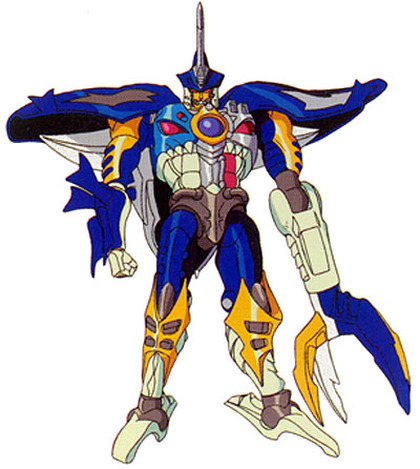 Profile: He is one of the most feared and respected Decepticon warriors. His intelligence and love of poetry fools friends and enemies into letting down their guard - only to witness his terrifying change into a merciless warrior. The Anchor Arm on his left side can crush even the thickest, strongest wall like a microchip in the jaws of a shark.

Weapons of Choice:
Scrapbook notes (Personality and development): Another pretty effective trooper, but one with a pretty odd quirk: a love for poetry and theatrics. Unlike many of the other Decepticons, Sky-Byte is pretty sensitive and very passionate, but his biggest flaw is that he's totally impatient and bombastic, which allows for a large amount of comedic moments. Despite his taunts and bombastic gloating, Sky-Byte has a strong sense of honor and respect for his opponents, which is something that his Autobot rival Drift finds unique and it's also the reason why he finds Sky-Byte an opponent worthy of his attention.

Drift: Sky-Byte is the only Decepticon who has a conception of honor. He is a very disciplined martial artist but his impatience and gloating nature can make him lose focus in the battlefield. However, it's always an honor to see that there are still Decepticons who respect martial arts.

Quake: Martial arts???!!! I mean, seriously!!! This tiburón is so strange. Not only does he fight with honor, but he also loves writing poesía, he also dreams ta be an actor, he likes the Wizard of Oz and he likes crooners!!!! Okay, so that last one isn't that weird, but ayayayayay, he's just pretty weird!!!!