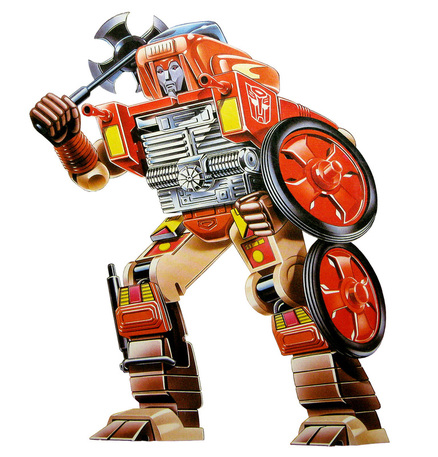 Profile: Wreck-Gar leads the Junkions, a race of junk robots. He's made of rusted scraps, chassis bits, manifold parts and dented odds and ends. A little scatterbrained, he speaks in odd-rhyming, pieced-together sentences. His words are a junkyard collection of broadcast fragments from T.V. commercials and radio jingles. In robot mode, he carries an armor axe and decelerator laser that inhibits an enemy robot's flow of cerebral impulses.

Weapons of Choice:
Scrapbook notes (Personality and development): A native from the planet Junkion, Wreck-Gar was scouting around for junk when his ship started malfunctioning and crashlanded on Earth. The first thing he sees while coming out of his wrecked ship is four beings coming toward him. They were Autobots Arcee, Daytonus, Minerva and Strongarm. He then introduces himself with the Universal Greeting, and despite the fact that he's a very peculiar being, he earns the Autobots' respect by helping them defeat Sky-Byte and the Battlechargers. Wreck-Gar then decides to stay with the Autobots, because of the fact that the Autobots are the first non-Junkion friends he ever had.

Siren: Dang, this guy is really weird. He talks LAHK a dang TV set, he falls apart yet he don't realize it and he's an alien!!!! But still, AH'M glad that this trash can is on our SAHD, 'cause he really gives them 'cons a major beatdown.

Deluge: TIS is a verry interresting specimen. An alien being WIT TE ability to surrvive TE most devastating damage levels morre effectively TAN TAT morron Quake. TE Autobots arre rreally forrtunate to have this being as parrt of TEIRR team.