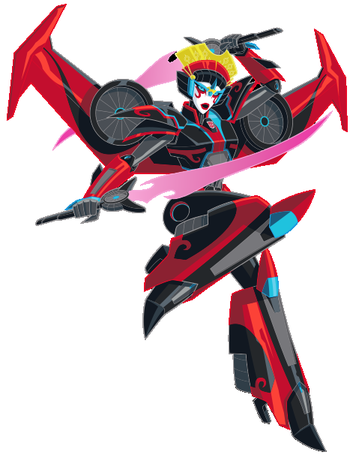 ​Profile: Like her lifebond partner Smokescreen, Windblade has some traits that would make her seem more like a Decepticon instead of an Autobot. She's somewhat overconfident and snarky, but she does care about her fellow Autobots deep down. She calls the Autobots by nicknames like Slick (Smokescreen), Bossbot (Rodimus), Pat Novak (Nightbeat), Mamabot (Arcee), Cutebot (Bumblebee), Tinkerbot (Wheeljack), Corliss (Minerva), Splinterbot (Drift), Mork (Wreck-Gar), Sarge Loudmouth (Siren), Fonzbot (Daytonus), Partybot (Nautica), Copbot (Strongarm) and Graduate (Breakaway).

Weapons of Choice:
Scrapbook notes (Personality and development): Windblade met Smokescreen a long time ago in a Cybertronian Nightclub. She was immediately attracted by the young Nightclub Singer that she fell in love with him. Then, tragedy struck when her master, Yoketron, was killed by the evil Bludgeon. Smokescreen then decided to go with her to put a stop to Bludgeon's rampage. They successfully tracked him down and sent him to Dimension 9-84. After that, Smokescreen proposed marriage to Windblade. She accepted and they were joined under the Covenant of Primus. They worked as law enforcers for a while until the merciless bounty hunter Lockdown extracted Windblade's spark from her body and steals it. Smokescreen searched for Lockdown for the longest time, while Windblade's body was being guarded by her old friend Chromia. Smokescreen, with the help of the masked ranger Star Saber and his faithful friend Victory Leo, tracked down Lockdown and recovered Windblade's spark. She revives, but due to her body being separated from her spark for the longest time, she hasn't aged since the spark extraction. Windblade is a pretty naughty lady. Whenever Smokescreen rides her in jet mode, she gets exceedingly aroused and excited. Outside of combat, she can be frequently seen seducing Smokescreen and inviting him to her room.

​Smokescreen: Windy is the type of gal that was made for a bad boy like me. She's just so brave, tough and aggressive in battle. She's also a pretty hot temptress. She loves to seduce me playfully, and whenever she transforms into jet mode, she just begs me to ride her. She's a very naughty girl, I LIKE IT!!!!

Starscream: How can a superior being like myself be beaten by a miserable female jetbot???? It's inconcievable, and yet, it's happened so many times!!!! It's impossible!!!! Me, the most sophisticated Decepticon of them all, beaten by a single female jetbot and her lifebond partner???? I'll make them pay for this!!!!!!!!