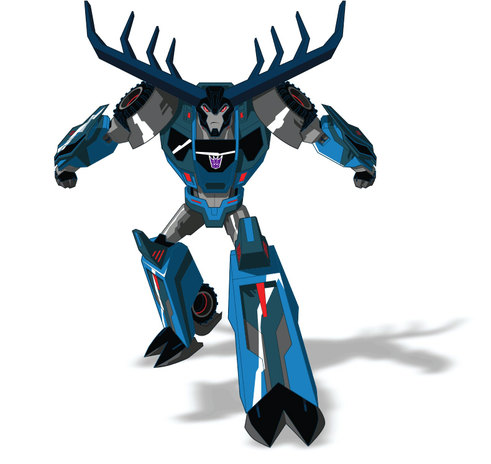 Faction: Decepticon
Function: Enforcer
Motto: You either join wit' me, or you is gonna answer to ol' Mr. Lupara and Mr. Street Sweeper!!!

​Profile: The nastiest, most despicable and merciless being in the universe. A Cybertronian crime boss, Thunderhoof controlled all the gambling, gun smuggling, counterfitting, brothel and warehouse rackets in Cybertron. That is, until Nightbeat exposed his operations and forced him and his entire criminal organization into exile. He hates the Autobot detective so much that he has a vendetta against him and has him marked for death. In vehicle mode, Thunderhoof is armed with a rake made of Cybertanium forks that can pierce through any surface. In robot mode, he's armed with two powerful horns made from the vehicle mode's rake. His body is made of an almost impervious Cybertanium alloy which protects him from laser blasts. Although he likes to run at his enemies with the speed of a bull and ram them, he is armed with five of the rarest and most powerful weapons ever created: a Plasma-powered Lupara, an Energon-powered Street Sweeper shotgun, an Automatic Machine Gun loaded with exceedingly powerful Destronium shells, a Subsonic .38 Snub Nose Handgun and a Nucleon-powered Magnum. Although exceedingly powerful, he's also prone to malfunction and getting stuck in mid-transformation. He can also be frequently distracted in battle by things ranging from a little butterfly to an Autobot mocking him from afar and his ramming attacks drain a lot of his energy.

Weapons of Choice:
Scrapbook notes (Personality and development): Cybertronian crime boss and Shockwave's arms supplier. Very knowledgeable about firearms and combat, but also very clumsy and impulsive. He also has a vendetta against Nightbeat for shutting down his criminal operations back on Cybertron. His favorite arsenal piece is his Plasma Lupara. In his own words: "I can always rely on Mr. Lupara. From afar, he makes them Autoscraps scream in pain and horror. From up close, he scares the life outta any unfortunate sucka who dares ta defy me. If you is trying ta go against me, ol' Mr. Lupara is gonna be very, very upset."

Nightbeat: Don't even dare to mess with this guy. He's dangerous and conniving. He's respectful, but if you mess with him, he'll hunt ya down. I learned this the hard way. I busted up all his operations, from counterfitting joints to cat houses. Because of this, I'm a marked man, but I don't care, 'cause if I die, I'll do it with the satisfaction that I did the right thing.