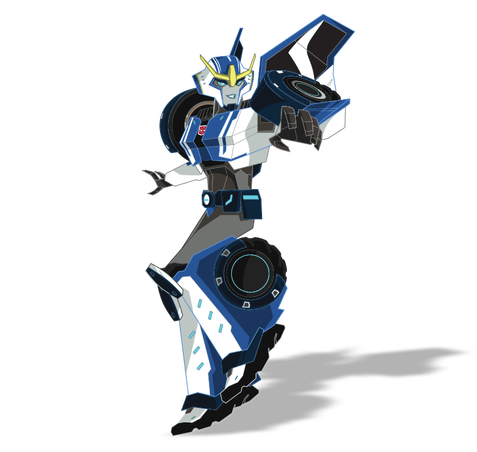 Faction: Autobot
Function: Counter Intelligence
Motto: Mess with the law, and you're messing with me!!!

Profile: Despite being one of the youngest Autobots in the team, Strongarm is extremely disciplined and she has also studied law regulations so many times that she can remember them with ease. A reliable officer, she can take on anybody when she's in robot mode, and she's always willing to do anything to uphold the law. However, despite all this devotion to law enforcement and her effectiveness, Strongarm has a tendency to feel depressed due to the fact that her "by-the-book" personality makes her feel like a misfit among her fellow Autobots.

Weapons of Choice:
Scrapbook notes (Personality and development): Although she's slightly younger than Minerva, Strongarm is a very tough and aggressive law enforcement officer and Counter Intelligence agent. However, despite knowing regulations like the back of her hand, she can get quite depressed at times due to feeling like a misfit. Knock Out seems to notice this immediately the first time he sees her and he tries his best to make her feel better. Strongarm starts falling in love with Knock Out, but she really can't admit it due to the fact that she feels that dating a Decepticon could compromise her effectiveness in battle. Whenever a Decepticon experiment is being tested, Strongarm will always be the first one to fall under it's influence and she'll also start acting out-of-character. This will be used for comical effect.

​Arcee: I've never seen such discipline and devotion to law and order in someone as young as Strongarm. Despite being very young and inexperienced, she's a reliable officer and a very aggressive fighter. However, what really saddens me is the fact that doing things "by-the-book" has made her a little bit of an outcast. She rarely comes to the base and she spends most of her time at police headquarters.

Knock Out: This babe needs a man. A man who can give her love, warmth and, most importantly, a really good time. I mean, seriously, she just seems so sad and lonely most of the time, and besides, I know she likes me. I'm pretty much irresistible.