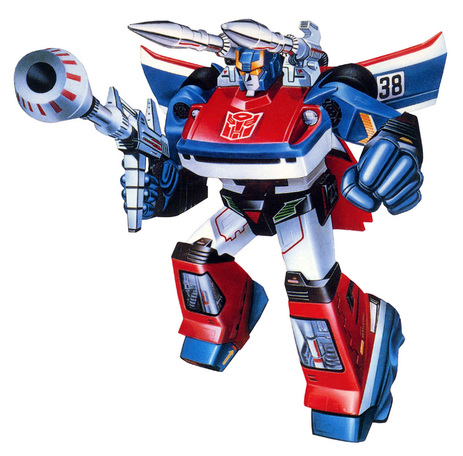 Faction: Autobot
Function: Diversionary Tactician
Motto: A look can be deceiving; a touch can be lethal.

​Profile: Whether engaged in raging battle or friendly conversation, an ulterior purpose usually exists. Job is to lead enemy astray. Sneaky, but charming and affable... considered most devious yet most trusted of Autobots. In car mode, emits thick smoke from tailpipe... attracts to metal. In robot mode, shoots missiles which wreak havoc on enemy aircraft radar and guidance systems... electro-disruptor rifle shorts out electrical targets.

Weapons of Choice:
Scrapbook notes (Personality and development): The veteran with a gambling attitude towards everything, Smokescreen has seen a lot of combat and fought with the best. He once helped the mysterious bounty hunter Devcon in taking down Lord Gyconi's gladiator fights operation. Dependable and strong, Smokescreen also manages to be pretty smooth and cool. He'll be used as a means to expand the cast with interesting and colorful characters. Whenever he's on an adventure, he'll team-up with a guest character almost as badass as him (ranging from monster hunter Crosswise and his assistant X-Car to demolition expert Flareup), which will make him sort of the character with whom you can meet these new guys. Lifebonded to Windblade, who is almost as badass as him. Windblade's spark was once captured by bounty hunter Lockdown, but Smokescreen (with the help of the mysterious masked ranger Star Saber and his faithful friend Victory Leo) will recover her spark and revive her.

Windblade: Smokescreen is a bad boy. Ooooh, he's the only one who knows how to ride me in vehicle mode. That's why I married him. I've always liked bad boys, but Slick-bot is a very special bad boy. He's one of those bad boys who has a heart of gold deep down.

Quake: Caramba, this is one of those Auto-vatos that are really hard to beat. He has been in many battles and he's won them all. Boy, he has made my cabeza fly out of my body several times. It's frustrante!!!!​