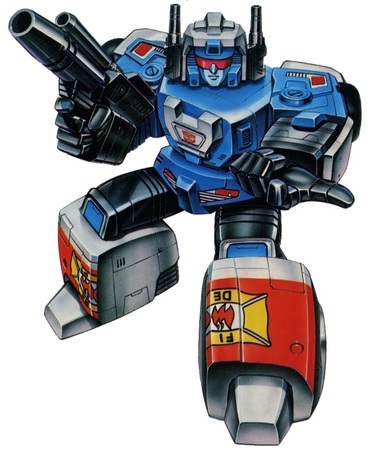 ​Profile: Raised in the deafening Sonic Canyons of southern Cybertron. Loud, somewhat overbearing. Screams orders at his Autobot subordinates. Dominates every conversation because he's louder than everyone else. Armed with a sawed-off Carbon Dioxide shotgun that shoots bursts of high-impact frozen gas. Also armed with two armor-piercing, sonic-screamer pistols.

Weapons of Choice:
Scrapbook notes (Personality and development): The meanest, loudest and most aggressive member of the Autobots. Although built for Incendiary Damage Control, his personality traits make him a pretty effective drill instructor. He's loud, short-tempered and impatient. Despite this tough, loud exterior, Siren does care about his fellow Autobots deep down. His loud, bombastic behavior is a big contrast to Drift's soft, calm attitude. However, despite this contrast, they can be frequently seen together training their fellow Autobots.

​Daytonus: Eyyyy, you 'cons don't mess wit' this guy. He's just a mean, loud and angry 'bot. This also makes him an effective drill sergeant, but it also means that he doesn't really know how to keep his cool. So yeah, the 'cons will have ta get scarce, 'cause Siren is really gonna give it to them good!!!!

Nautica: Gee, why does the Sarge gets so angry all the time??? I just got distracted by a little butterfly and he started yelling and screaming at me like mad. Does he hate 'em??? I think he needs to go to parties more often.