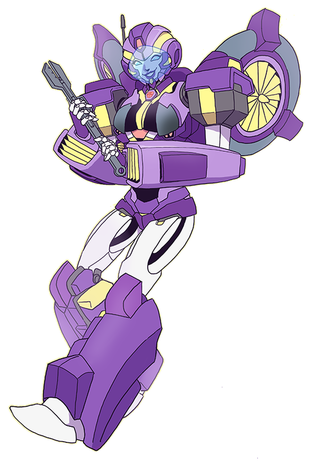 Profile: An incredibly intellectual teenager, Nautica has studied more subjects than anyone can imagine. However, despite being a very intellectual girl, she is very different when compared to her best friend Minerva. Whereas Minerva is very shy and reserved, Nautica is more of a party animal, always eager to have a great time. She can also be easily distracted by something or someone that interests her. She's also usually seen carrying her trusty wrench, which she uses frequently to repair Autobot vehicles. Due to her daring personality, she has earned the nickname "Naughty Nautica".

Weapon of Choice:
Scrapbook notes (Personality and development): The coolest teenage girlbot in the universe, Nautica is Minerva's best friend. The two are almost the same in personality, except for the fact that Nautica is more of a "party dudette", whereas Minerva is extremely shy. She arrived on Earth after her ship crashlanded in the woods near Quebec. Minerva introduces Nautica to her fellow Autobots, and they immediately develop a fondness for the girl. Daytonus develops really strong feelings for her, and the two immediately start a relationship. She can be frequently found repairing vehicles at the Autobot garage, reading Shakespeare along with Minerva or doing her schtick at the dance floor of any party you can possibly think of.

​Daytonus: Nautica is the gal of my dreams. After I saw her for the very first time, I knew this was the one I've been lookin' for. It's just so much fun to hang out with her and she's really good at that which Marie and Nicky call "foolin' around".

Breakaway: Nautica's cool. I can see why Daytonus likes her a lot. She's just like Minerva, but with a much more daring personality. No wonder they called her Naughty Nautica back on Cybertron.