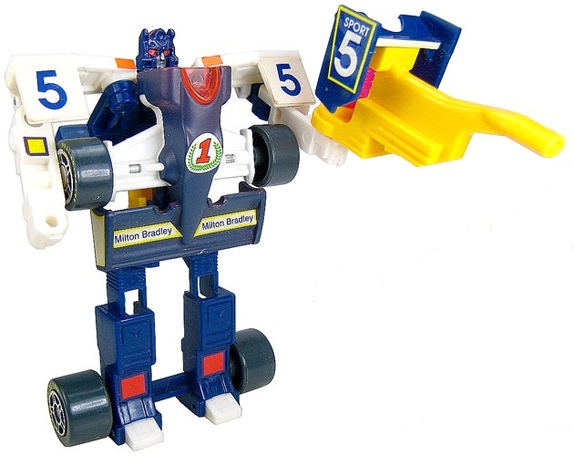 Profile: With a twisted mind, he devises hideous attack methods that can astonish even veteran Decepticons! He lives in a world of his own, horribly plotting his next move. He can surprise with fast-action water power as a car, and convert to an equally well-armed attack robot.

Weapons of Choice:
Scrapbook notes (Personality and development): The most evil, sinister and depraved Decepticon there can be. He can change his colors like a chameleon in order to sneak up on his enemies. His deadliest weapon is a dangerous blade concealed in his wrist. A lot of Autobots have fallen to this blade. He's also responsible for the deaths of Minerva's father and her brother Evac. His torture methods are much more advanced, violent and brutal than those of Knock Out.

Minerva: This guy is a maniac!!!! A beast!!!! He killed my father, struck my brother and he captured and tortured me. Why did he have to kill half of my family????!!!!!! I'm scared... I don't care if I'm next on his list, but I'm really worried about Mom. If he kills me first, then he'll go after her, and I can't let that happen. But still, whenever I see him, I just can't help but remember that horrible moment when Evac came to my house, bleeding oil through his abdomen and dying in my arms.

Daytonus: This dude is so not cool!!!! He sneaks up on ya, uses his blade and he can either leave ya in a coma or send ya packing to the Allspark. Plus, he has that scary, untrustworthy look on his face. Poor Minerva is just so freaked out wit' this guy, and I can't blame her. He's just a nasty piece of scrap who deserves to rot in the Pit!!!!