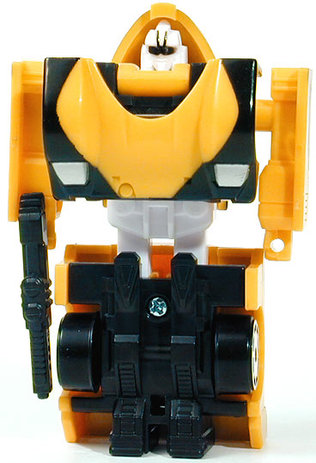 Faction: Autobot
Function: Mechanic
Motto: Coolness is no trick, it's a gift!!!

Profile: Daytonus is an enigma among his fellow Autobots. Although he is pretty young and rebellious, he has a very high moral code. He always treats others with respect and sticks up for those who can't defend themselves. He's also very successful with women. He has dated more female Cybertronians than you would believe. Another thing that makes him even more enigmatic is his almost magical ability to manipulate technology with just a nudge, bump or a snap of his fingers for things such as starting a car, turning on lights, coaxing free sodas from a vending machine, activating Teletraan-I, making girls respond, or changing the song selection on a juke box. He's also a very deadly opponent in the battlefield, daring to take on opponents like Sky-Byte, Thunderhoof and Shockwave. His only weakness is his self-confidence, which really makes it difficult for him to apologize for something he said or to admit when he is wrong.

Weapons of Choice:
Scrapbook notes (Personality and development): The Fonzie of the Autobots. The resident cool guy with the ability to make everything do what he wants. However, despite these enigmatic abilities and his aloof attitude, he is also what you would call the "Ultimate Autobot". He is kind, brave, loyal to his friends and willing to sacrifice himself to save the people he loves. Calls himself the Fonz-Tonus. He has dated every female Cybertronian in the universe with the exception of Windblade (due to her being married to Smokescreen). However, despite his success with women, he still feels like he hasn't found the girl of his dreams. That is, until he meets Nautica, a girl just as cool and awesome as he is. They immediately start a romantic relationship and they can be frequently seen helping each other out at the Autobot garage. Despite his aloofness, Daytonus also has more whimsical traits, such as a devotion to the mysterious Star Saber. And even though he's pretty confident with women, he has a tendency to blush whenever Arcee, who becomes like a surrogate mother to him, kisses him on the cheek (even though they have dated a lot of times in the past).

Nautica: Golly, Daytonus is just an awesome guy all around. Not only is he incredibly handsome, charming and totally uber-cool, but he's also a really great warrior. Boy, he's just perfect, I really enjoy being with him. We go out to a lot of parties, so that's a bonus, and we've been dating ever since I arrived here.

Strongarm: Well, what can I say, he just is the hero of every up-and-coming Autobot. I've had the pleasure to go out on a date with him many times until the day he would find the girl that he's looking for. He's also loyal to all of us and lemme tell ya, if we had more 'bots like him, the 'cons would have been defeated a long time ago.